Both first time and ongoing claims for unemployment insurance in the Lynchburg region declined last week. 2,301 continued unemployment claims were filed in the Central Virginia Local Workforce Development Area (LWDA) during the week of November 7, a decrease of 4.8% from the previous week’s figure of 2,417. Continued claims are filed by individuals who have already made an initial claim and are now filing weekly claims to continue receiving benefits. Continued claims increased in Amherst County (up from 248 to 259), but decreased in Appomattox County (down from 119 to 116), Bedford County (down from 557 to 517), Campbell County (down from 362 to 325), and the city of Lynchburg (down from 1,131 to 1,084). The Central Virginia LWDA includes the city of Lynchburg, along with the counties of Amherst, Appomattox, Bedford, and Campbell. Continued unemployment claims in this region peaked at 9,659 during the week of May 9, 2020.

Initial claims in this region declined last week to 190, a drop in 15 claims from the previous week’s figure of 205. Initial claims are filed by those making a claim for unemployment insurance for the first time.
Fewer new claims were filed in Bedford County (down from 65 to 48) and the city of Lynchburg (down from 93 to 84), while Amherst County (up from 13 to 22), Appomattox County (up from 7 to 8), and Campbell County (up from 27 to 28) all reported a higher number of initial claims than the previous week. The lowest number of initial claims filed in the Lynchburg region since the start of the pandemic was 159 during the week of October 10, and the highest number was 3,357 during the week of April 4.


ABOUT THE CENTRAL VIRGINIA WORKFORCE DEVELOPMENT BOARD

The Central Virginia Workforce Development Board (WDB) is the designated regional convener and administrative entity that coordinates workforce training and career services through federal funding from the Workforce Innovation and Opportunity Act (WIOA). We are charged with overseeing and implementing workforce development initiatives and activities throughout the Virginia Career Works – Central Region. Activities of Virginia Career Works - Central Region are supported in part with funds the from U. S. Department of Labor Employment and Training Administration Workforce Innovation and Opportunity Act (WIOA) award (#: AA-32183-18-55-A-51) awarded to the City of Lynchburg on behalf of the Central Virginia Workforce Development Board. The Central Virginia Workforce Development Board is an equal opportunity employer/program. Auxiliary aids and services are available upon request to individuals with disabilities. TDD-VA Relay 711. 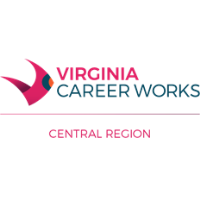